I guess one of the key elements of making a music-tour-by-bicycle happen would be having a bicycle.  Sarah’s been mousing away trying to figure out what we’re supposed to be looking for. 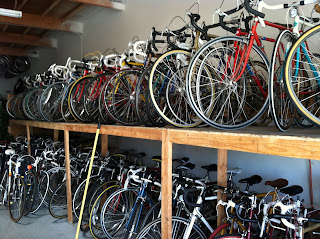 When we started training, Sarah was riding a super nice racing bike, and I was riding an old Univega.  Sarah’s bike is super nice, but wouldn’t work for tour, because it’s a little too lightweight and racing bikes aren’t made to withstand the amount of wear and tear that a bike will get on such a long trek through the elements.  My old Univega definitely needs some work.  It’s a little rickety, and some of the gears aren’t as smooth as I’d like.  In my search for my touring bike, I was looking for something that felt a little more smooth and solid.  And in a cute color, of course.

The bike hunt led us in quite a few different directions.  At first, Sarah started debating over whether she wanted to sell her racing bike and buy a brand new, top of the line touring bike, or buy a trailer to attach to her racing bike, so she wouldn’t be putting as much stress on the bike, and wouldn’t have to buy a new one.  Ultimately, she decided it would be better to invest in a new bike vs. the trailer.

We started looking at REI, since they had a 20% off one item sale, we figured we could make that a big ticket item for the tour like the bike.  We were considering the Novara Safari Bike, because it’s meant for touring, and even comes with a rear rack, but they were out of stock at every single location in Southern California.

Then we turned to Craigslist.  And Sarah found this great nonprofit organization, Bikes Build Futures.  It’s an organization in Orange County, focused on taking homeless youth, ages 18-24, off the street, teaching them how to build and maintain bicycles, giving them a job skill set, and helping them put together resumes and make some money, and maintain their own livelihood.  It’s a great program, just starting out.  They are very passionate about what they do, and have a great purpose.  Sarah saw a few bike that they were selling, and one of the  heads of the organization invited us into her home to check out the bikes that she had on  hand that might fit us.  None of them did, but it was really wonderful to hear about what they were doing.  If you’re interested in volunteering or donating a bike, check out their website.

Another option for our bikes is Bikes Direct.  It’s a website that sells new bikes at 60% off.  We were looking at the Windsor Tourist and the Gran Turismo.  Both of these would have been great bikes.  We’ve talked to some of our cycling friends, and the site is totally legitimate.  They pretty much cut out the middle man, and you are buying the bike pretty much straight from China.  They send you all the pieces, and you assemble them together.  Which is kind of good, because then  you get more of a feel for how your bike is put together, and can probably get better at fine tuning things that need to be adjusted as you go.

At the time, we had decided to get our bikes on Bikes Direct.  REI had a big bicycle fest last Saturday, and we went to check out some workshops, and vendor booths.  Right before we left, Sarah got a tip from another cycling friend about HB Bike Shop, which was on the way.  We stopped by, and it’s a small business run out of a little warehouse in Huntington Beach, specializing in road bikes from the 80’s cycling era. 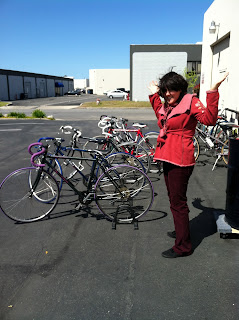 Sarah called him ahead of time, and Mike, the owner, set aside about 6 or 7 bikes that were our size, and would work for the trip.  They were all unique, and Mike took the time to explain the differences in the way each bike was set up, and the different brands, and pros and cons of each bike for the trip that we were taking.  The best part– They were all under $300! 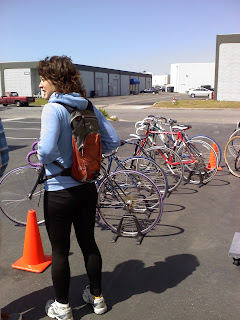 Sarah chose a Trek and I found a Specialized Cross Roads.  It’s a wonderful bike, and I’m really happy with it, but I think I half chose it because it was green and purple.  Mermaid colors. That might just be my color motif for the trip.
Then, later that day, serendipity struck again.  One of our customers at Viento y Agua, the coffeeshop we work at, saw our postcard about the trip.  Bela, the owner, started telling him about the trip, that we were riding from Seattle all the way home, and that I was going to buy a Baby Taylor guitar to bring along.  Bobby, the customer was really impressed with our endeavor, and super inspired.  And also, happened to have a Baby Taylor guitar kicking around in the trunk of his car.  Right then and there, he offered to let me borrow it for the whole trip, and just return it when we get back!  He left it that morning, and I picked it up when I came into work later that day.  Such luck!
Bonus points:  I entered a raffle at REI that day we went to the cycle fest and won!  The prize was a bunch of little odds and ends for cycling!