Follow Me Along The Sea: Lincoln City to Sunset Beach State Park!

BY: Alyssandra Nighswonger - May 23, 2012
Posted in - News
Lincoln City to Newport: 24 miles
We took a half day to get from Lincoln City to Newport, where Tyler had some friends of his family that we could stay with.  The Oregon Coast is very beautiful, but also very hilly.  I got another flat about 10 or 15 miles from town, and we McGyver’d the tire to try to make it the last leg to the bike shop in Newport, or at least to our host’s house.  I really wish I had gotten Gatorskins, or another tire of comparable durability made of the kevlar material.  We went over some rough road, and we made it to Linda and Papa’s house pretty early.

We got to their house in Newport, it was a short walk away from a great view of a lighthouse, and a really cute little place.  Tyler knocked on the door, and we greeted Linda, she was super warm and friendly.  When Tyler introduced me, she looked at me, and smiled real big, and said, “I love you already, you look just like my granddaughter.”  This made me feel so at home and gave me all kinds of warm fuzzies.  She reminded me a little of my mom, too.  They took us to the Newport Bike Shop, which was pretty amazing.  They were catered more to touring cyclists, and even had a lounge upstairs where cyclists can shower, take a nap on a couch or even do laundry!  I bought some better tires, and feel really secure about them.

Linda and Papa are a really fun and inspiring duo.  They used to be motorcycle bikers, and now Papa is a minister, and the two of them have started an outreach program to help the homeless.  They’re very down to earth and loving, and accepting, and made me and my friends feel so welcome.  They and some of their friends used to have a lot of money, but in the recession have lost a lot of it, and have sold a lot of their property, and are living more frugally, and with a purpose to benefit their community. 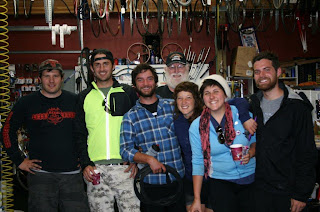 They set us up a whole house to stay in for the night, called “The house of refuge”,  Carol, a friend of theirs had converted the bottom story of her house to help house the homeless in transition.  It was on a cliff overlooking the ocean, with a short walk down to a lighthouse.  We walked to the lighthouse a few hours before the sunset, and the ground had little strawberry plants growing everywhere. The lighthouse had been built in the early 1800’s, and there was a plaque that said “To those lost at sea with special affection to the fishermen of the Pacific Northwest.”  Reading it on this journey made me decide to read the Illiad when I get home. 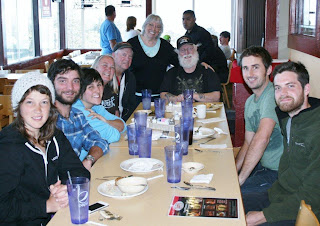 Linda gave us a tour, and told us all about the history of Newport.  There’s an aquarium that is self-funded and works a lot with local schools, and NOAA and National Geographic do a lot of work and research there.  It’s a neat city, with lots of small businesses and artists, and the people that live there value their time over their money.  You’ll see a million dollar home next to a run down house with knee high grass in the lawn.  People don’t care so much about looks, and small businesses will close random days or hours if hunting or fishing season is in or the surf is good.  I think there’s a lot to be learned about living life for the quality of each day, and letting tomorrow worry about itself. 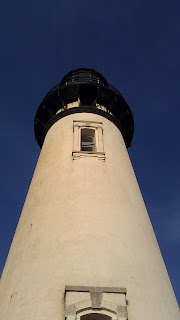 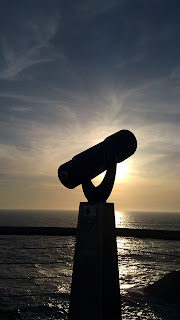 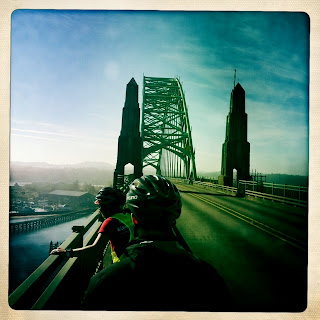 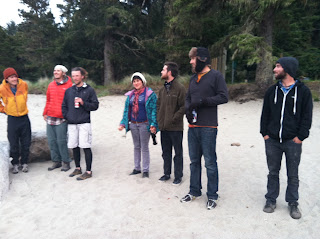 We did some laundry, built a fire, and had a really nice night at the campsite.  We always cook in a community fashion.  We decide on a meal, and everybody buys an ingredient, and it ends up pretty healthy.  That night we did fish with some leftover vegetables, and the next night, we did indian food from Trader Joe’s we had been carrying for a while with pasta. 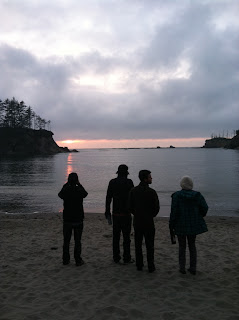 Our rest day was really nice. We hadn’t realized how important they were, but it was really something to be able to slow down, and take in the beauty of our majestic surroundings.  We took a walk to a botanical garden featuring Rhododendrons, and then to Simpson’s Reef, where we could see Seals, Elephant Seals, and Sea Lions.  We saw some strange birds flying everywhere.  We couldn’t figure out what they were, so it might as well have been an eagle.  Now, every bird could be an eagle.
Here’s a hello from our rest day:
https://youtu.be/Q8io6M2tUC4

TECHNOLOGY: a media mashup this Friday at Exhibit [a]

For those of you that are old school, 6251 PCH was a local L… READ MORE