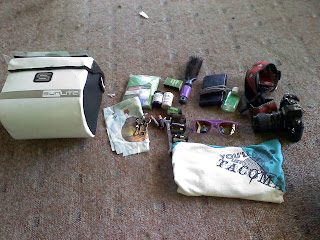 We woke up the next morning in Tacoma pretty tired. The first thing I did was figure out what I could do to lighten my load.  I ditched my waterproof handlebar bag.  It’s bulky, made my bike way to hard to handle, and is very easy to overpack, making the bike even harder to handle.  I had tried to streamline the things I was bringing before I left, so it was very difficult to strip down my load even further.  I asked Rebecca to mail home my waterproof handlebar bag, my poncho, 3 rolls of film (I figured Toren could bring them with him to San Francisco, and I could mail the rolls of film to Fromex as I go to get processed), extra batteries, since I can always pick more up as I go, 2 containers of spices, all of my keys except my bike lock key, my hairbrush, a pair os sunglasses that wasn’t working for the ride, one pack of waterproof matches, since I brought two, hand sanitizer, a “You’ll like Tacoma” T-Shirt that Rebecca gave me, my portable harddrive, a wrench, and sadly, my Vivitar 3400 35mm camera.  It’s too heavy.  So, I asked if my dad would find one of his lighter weight minolta’s and send them with Tyler to Portland.

After I lightened the load, my bike felt way more comfortable to handle.  I also, changed the way I packed.  When I had first packed, I wanted to be super organized: all the clothes in one pannier, with the stuff I would use less at the bottom,  all the food in one pannier, and then music and camping stuff in the other pannier.  This didn’t work, because it made the weight uneven, which was part of what made the bike hard to handle and flop all over the place.  So I started spreading everything around, with the heavier stuff on the bottom, and also, put more of my load in the back of the bike. 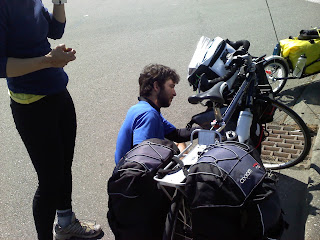 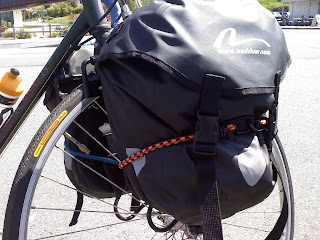 A few miles into the ride, we started making some small adjustments.  Dustin realized that our front panniers weren’t latching quite properly to the front rack.  Mine had a strap that needed to hook on to something that wasn’t there on these racks, so we took some bungee chords and secured them, so they would be more solid.  Sarah’s panniers had some hardwear that needed to be flipped around to be more steady.  Dustin’s been super handy and helpful and wonderful to have on the whole ride so far!
It was another beautiful day.   We didn’t put on quite enough sunscreen, and we all got a little burned.  The directions were easy enough to follow, but we got another late start, left at 11 again!  The ride was very beautiful.  Washington is a gorgeous state.  We started getting a little more used to our bikes.
Our biggest problem that we encountered was that google directions sent us onto a road closed off to anybody but military personel.  They checked our ID’s and turned us right around.  Fort Lewis takes up a huge chunk of land between Tacoma and Olympia.  We had had a hard time finding a bicycle route between the cities, and that must have been why.  The STP ride (Seattle to Portland) doesn’t even touch Olympia.  After checking our maps and GPS’s we figured out that the only way to get to the next part of the ride was to ride our bikes on the 5 freeway for a little while.  We looked at the signs and it only said, “No pedestrians,” which didn’t include us.  We checked the GPS again, and we only had to ride it to the next exit to get around the military base.
It wasn’t too bad.  The freeway wasn’t very busy and had a very wide shoulder. We were pretty happy to be off of it, though. 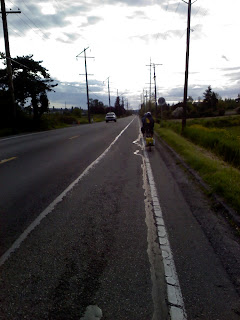 The next few miles weren’t too challenging, but it still seemed long and tiring.  We arrived in Olympia by 4pm.  We stayed with Ale, a friend of a friend, who lives by herself in a cute little house on the East Bay of the Puget Sound.  She had visited our friend, Grace, in Long Beach, saw our postcard about the trip, and read that we were riding through Olympia.  She thought the whole idea of the trip was really neat, and was eager to host us! 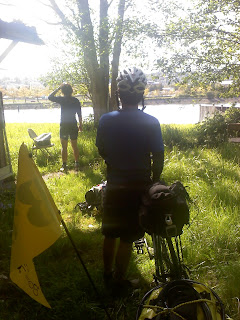 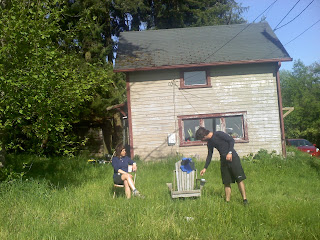 Ale was a wonderful host.  She’s cuban!  She took us on a tour of the city, we went shopping at the co-op that she works at.  She’s actually doing co-op exchange, where she went to Venezuela to work in a co-op for a few months, and now she’s hosting a friend from Venezuela to work in her co-op.  She also does a lot of film projects.
Olympia is a really neat city.  It’s very beautiful, most of the restaurants are vegan and gluten-free friendly.   There is a big music scene and a punk scene.  It’s the capitol of Washington, so the people there are very politically active.  Ale showed us the lake in front of the Capitol building where the Occupy movement had camped out for a while. 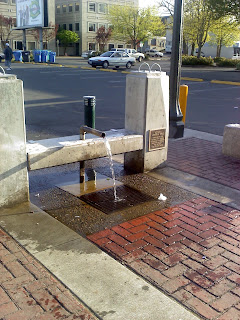 She also took us to Olympia’s Artesian Well!  It springs up from deep in the ground, and all the layers of minerals it goes through to come to the surface makes it into amazing drinking water.  It’s kind of strange. It’s this pipe just spouting out water in the middle of a parking lot, with a little plaque next to it, and a display by it explaining the history and geography of it.  There were a group of guys by the water, dressed up like skater dudes, who in any other town, you would expect to be drinking, or skating, or getting into some sort of trouble.  They were just kicking it by the well, talking about how fresh the water used to be before they changed the layout, and how the pipe must change the taste, and complaining about this or that. It was unexpected and pretty funny.  Don’t judge a book by it’s cover.
The water was pretty amazing.  We filled up our water bottles for the next days ride, along with a few jugs for Ale.  Once you drink from the Olympian Artesian Well, it means you are destined to return again.  Olympia has a lot of neat little things like that.  They’ve also got some giant cedar trees planted at the Capitol building that sprouted from seeds that had flown into space on one of the space shuttle missions. 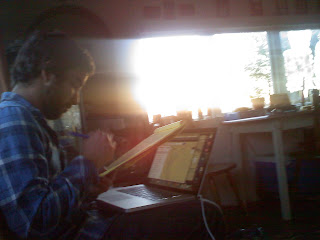 Ale made dinner, I took a nap, and Dustin and Sarah went over directions for the next two days.  130 miles to get to Portland, and I had a show planned the day we arrived.  We momentarily lamented over the fact that we had only ridden 31 miles that day.
But then the sunset happened. 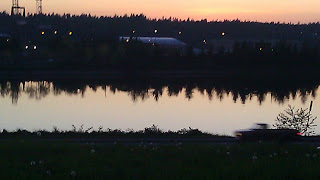 Here’s a video:
https://youtu.be/psddc-dmxJI
We had a really nice dinner with Ale.  She made chicken, asparagus, and salad.  She mentioned that she had lost a bunch of music, so I copied all the music I had loaded onto my mp3 player onto her computer  (which was easy since it’s a Sony and not an iPod).
We went to bed early and rested easy, planning to leave at dawn the next day.

For those of you that are old school, 6251 PCH was a local L… READ MORE