It’s impossible not to smile while watching a Shonen Knife show. Watching them perform is like Christmas morning and your birthday all rolled into one. It’s quite possibly the best day of your life. Kurt Cobain once said about the band, “When I finally got to see them live, I was transformed into a hysterical nine-year-old girl at a Beatles concert.” The legendary Japanese all girl trio was at Alex’s Bar this evening touring in support of their 18th album Pop Tune out now on Charamel Records.

The band’s current lineup features Naoko Yamano on vocals and guitar, Ritsuko Taneda on bass and Emi Morimoto on drums. Naoko is a founding member and leader of the group. Over the past 30 years she has been able to fine tune the style and sound of the band without losing any of their indie credibility.

Taking the stage in colorful matching mod outfits, Shonen Knife held up cloth banners with the band’s name printed on them and announced to the crowd that they were ready to rock. The packed club erupted in cheers. Shonen Knife has some of the most dedicated and obsessive fans in rock n’ roll. 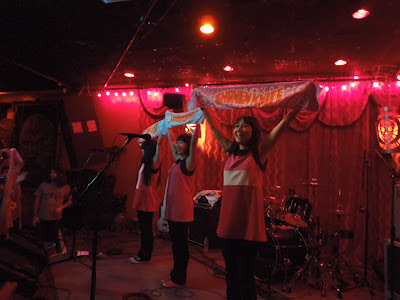 Shonen Knife taking the stage at Alex’s Bar.
They kicked off the evening with “Konnichiwa” from their 1998 release Happy Hour which has become their traditional opening song. If you’ve never heard one of their records or seen them play live, their sound is best described as a combo of pop, garage, punk and metal all put together with Ramones-like speed.
Their hour and a half set covered just about all eras of the bands 30 year history including several songs from their new album. The title track “Pop Tune” is their first single from the album and has an incredibly infectious high energy groove. They also performed “Psychedelic Life” with drummer Emi Morimoto taking over the vocal duties.
They band also played three songs off of 1992’s Let’s Knife album which is my personal favorite. The album was their first major label release in the US and contained several re-released older songs that have become standards of their live shows. They sent the crowd into a frenzy when they performed “Riding on the Rocket” and “Bear Up Bison.”  I was lucky enough to be at the front of the stage to record their performance of “Twist Barbie.” Click the link below to see the video.
No Shonen Knife show would be complete without a Ramones cover. Joey Ramone himself dubbed the band the Osaka Ramones back in 1998 due to their similar music styles. Tonight singer Naoko Yamano picked the song “Rockaway Beach” to perform since they “were performing in a town with beach in the name.”
After the main set the band came out for a one song encore. Naoko made the mistake of asking the crowd what they wanted to hear. This of course set off a 5 minute frenzy of people yelling just about any song title that the band have ever recorded. After Naoko was able to sort through all the requests she choose the song “Super Group” from the 2009 album of the same title. 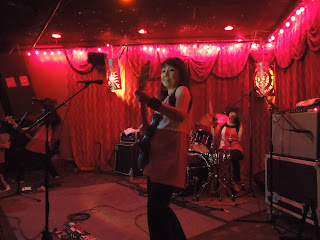 The band is always generous with their time after the show. They will pretty much stick around until the bar closes or the last fan leaves. Tonight was no exception. They were still at the bar taking photos and signing autographs after we left. Here’s a photo of one of my obsessive fan moments. 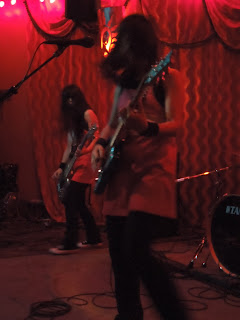 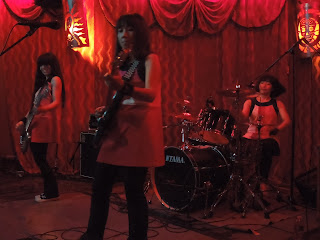