Buskerfest Brings Local Musicians To The Streets For All To Enjoy

What we love the most about Long Beach is that there never seems to be a shortage of incredibly talented local musicians. Long Beach has always been a mecca for artists that like to blend many genres and styles to create their own unique sound. In the past many of these artists have had to make the trek to LA to gain exposure. That all changed with the formation of Long Beach’s own musical showcase. 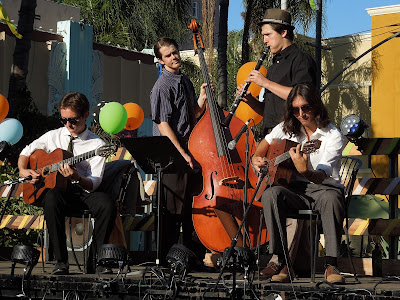 Now in it’s 5th year, Buskerfest has become THE place to catch the latest and greatest local talent. The grass roots music festival is held every August in downtown’s East Village Arts District. The crowd rewards the bands that they like with wooden nickels and the band that collects the most coins by the end of the evening wins a $2,000 record pressing or merchandise package.  This year’s competing bands were Hedgehog Swing, Dumb Love, Rainman, Dennis Robicheau, Move, The Melodic, Brother C & Sister J, Fathers & Suns and The Barrelhousers. There were also three non-competing headliners this year: Carly Ritter, The Fling and He’s My Brother She’s My Sister.

We got to the festival just in time to catch the gypsy jazz quartet Hedgehog Swing. What impressed us right from the start was their exceptional musicianship. Luca Pino and Gage Hulsey played their guitars with blazing proficiency. Clarinetist Kale Stiles and bassist Benj Clarke rounded out their classic swing sound. Some of their improvisation reminded us of the swing band Squirrel Nut Zippers. Click below to see a video we shot of Hedgehog Swing’s Buskerfest performance. The band attracted a sizable crowd including a pair of amazing swing dancers. 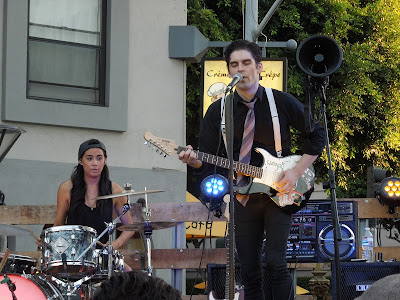 The next band that we had the pleasure of seeing was Brother C & Sister J. The male/female duo played a very raw blues-based form of rock that is similar in style to the White Stripes and The Black Keys. Brother C (Chris) has a very Hendrix inspired guitar style while singing with a vibrato like neither one of us had ever heard. Sister J (Jacqueline) is a high energy drummer that drives the bond between the duo and can feed off the slightest cue from Brother C.

You could feel the infectious energy from the crowd when the band Fathers & Suns took the stage. They were one of the competing bands but from the response they were getting, it almost seemed like they should have been one of the headlining bands. They already have a huge local following and rightfully so. They seamlessly blend a progressive rock musicianship with incredibly catchy song writing. Blending these two aspects border a fine-line not many bands have the ability pull off. They would go on to collect the most wooden nickels and claim the grand prize at Buskerfest, an honor that they completely deserved. Don’t be surprised if 2014 turns out to be a breakthrough year for the band. Click below to see the video we shot of the band’s performance. 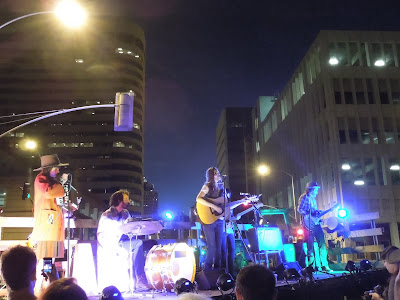 After all the competing bands had performed the organizers at Buskerfest had assembled a talented, diverse group of headlining acts to round out the evening. First up was singer/songwriter Carly Ritter who provided a nice change of pace with a blend of mellow folk rock and country. Carly’s music revolves around strong vocals, excellent songwriting and great harmonies. Her debut album comes out on August 27th on Vanguard Records. 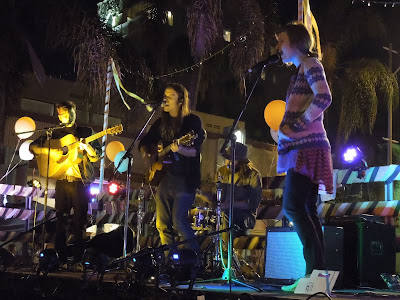 The Fling returned to the Buskerfest stage this year with a more stripped down approach. The Long Beach locals played some of their older songs and also debut new songs from their upcoming album “Mean Something” which is being released this week. The band’s sound is a mix of 90’s alt rock with just a touch of 60’s psychedelic mixed in. Their performance tonight was absolutely fantastic. The acoustic guitars with great harmonies made for an unforgettable set.

Below is a video that we shot of the band performing the song “Exile” from their new album.

We’re not even sure how to describe the band, He’s My Brother She’s My Sister. They have a truly original sound that has many elements of different genres of music mixed together. Our first thought was to describe them as rockabilly folk, but as the set progressed there seemed to be so many more layers to their music. The energy and the great hooks kept the audience singing and dancing. Even though the band wasn’t in the competition the crowd was pelting the stage with left over wooden nickels in appreciation for what they heard. This was a great ending to an incredible night of music in the LBC. We can’t wait until next August for the 6th Annual Buskerfest!