The band Papa played a special street date in-store performance tonight at Fingerprints Records in Long Beach to celebrate the release of their full length debut album Tender Madness. We didn’t know much about the band going into tonight’s show except for the fact that they were formed by ex-Girls drummer Darren Weiss and his childhood friend Danny Presant.

To say we were impressed would be an understatement. The band has a very powerful, full sound that seems fit for a large venue. Vocalist Darren Weiss actually joked to the crowd, “It’s nice to playing here tonight, we had already gotten used to playing stadiums.” Having Weiss front and center on the drums adds a raw energy to the band that can’t be ignored. Check out the video we shot of the band performing “Put Me To Work” to get a sense of this energy.

The band played an eight song set which were all tunes from their new album. The songs styles ranged from arena rock to power pop to indie rock. Some of the songs even felt inspired by 80’s new wave. It was a very intriguing mix of sounds that came across as very fresh and original.

The band is getting ready to head out on the road with Cold War Kids. If you have a chance to see them live don’t pass it up. The new album is excellent and is out now on cd as well as vinyl which includes a download card.

Set List
Papa
If You’re My Girl, Then I’m Your Man
Young Rut
Forgotten Days
Cotton Candy
Get Me Through The Night
Put Me To Work
I Am The Lion King 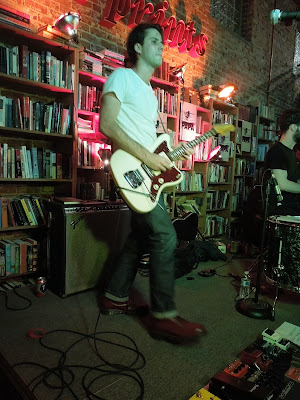 Interview: Long Gone John of Sympathy For The Record Industry

In this day and age of digital first, there are not many bus… READ MORE